You don't need a car to live in Tokyo.  There are plenty of trains and subways to help you get from one place to another.  I'm from Los Angeles, and unlike Tokyo, LA is a car city.  Without a car, it is difficult to go back and forth to work or go shopping for groceries.  Today, Los Angeles has a very big problem with too many cars on the road.

Los Angeles was designed for the car.  Instead of living in crowded apartment buildings, people bought houses in the suburbs and a huge freeway system was built so they could drive to work.  In fact, if the roads are not crowded, you can get to anywhere in Los Angeles in under 45 minutes.  But the city grew bigger every year, and now there are not enough roads.

Cars became an important part of California life.  Many people enjoy going for a drive along the Pacific coast or taking weekend trips to someplace outside of the city.  Some people have a love affair with their cars.  They enjoy spending time taking care of their cars and keeping them in good condition.  The car also represents freedom because it allows you to go wherever you want to go.  This mobility makes life very convenient. 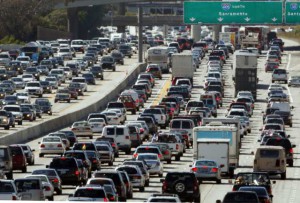 But there are many problems with cars.  They cause a lot of pollution.  Not too long ago, Los Angeles had very poor air quality.  The sky was usually brown instead of blue and it was difficult to breathe.  On many days you couldn't see the mountains near the city because of the smog.  (Smog is from "smoke" and "fog."  It is the name of the air pollution caused by cars.)  Today the air is much cleaner because companies improved the car engines so that they emit less pollution.

Another problem is that they are expensive to own.  Car owners must pay money for gas, car insurance, parking and maintenance.  Every year, they have to spend thousands of dollars just for the car.  If the gas prices go up too high, money will be a problem for many people.

Cars are also dangerous.  In 2010, more than 32,000 people died in America from traffic accidents.  Also, car crashes are the leading cause of death for teenagers.  Many people drive too fast and they don't pay attention to the road.  Plus, a lot of drivers don't use good manners on the road.  I think there should be more driver education to make the road a safer place.

But the biggest problem in Los Angeles is that there are too many cars!  During rush hour, the traffic is very bad and it takes a very long time to get home after work.  If there is an accident, the traffic jam will be even longer.  Many of the ideas to reduce the number of cars on the road don't work and it is too expensive to build more freeways.  And Los Angeles does not have a convenient public transportation system, so the car is the only option for commuting.

Many people get frustrated from driving in Los Angeles.  Unfortunately, there are not many solutions.  Maybe more people can use a computer and work from home.  I think in the future, new cities should be designed so that people do not have to rely on the car to live.  Please remember to always wear your seat belt when riding a car!

Vocabulary
Please look up these words: